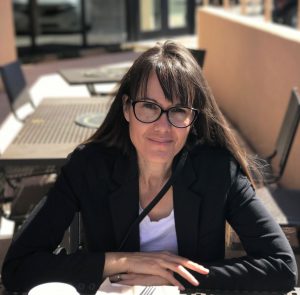 A small art class for homeschooled students was one important milestone in the journey that chronicles ARTK12’s founder, Kristin Draeger’s love of art. Now Kristin has taken a life-long passion for the arts and her unique ability to connect with kids and created engaging and entertaining art history curriculum and geography books for students of all ages.

In the fall of 2000 Kristin began a small art class with six homeschooled students ranging from kindergarten through third grade. They met in the living room of her home once a week for six weeks. Kristin showed them paintings of Leonardo da Vinci and Michelangelo, prepared forgeries for the students to have them pick out the differences from the originals and discussed the symbols of the paintings with them. At the end of each class the students did a small drawing.

The following semester she had 17 students up through the sixth grade and ran two classes for sixteen weeks.

By the fall of 2001 she had moved classes into the garage, purchased tables and chairs and was now running 4 classes of 8 – 10 students each, including students of junior high age. For the next couple of years students studied Ancient, Medieval, Renaissance and Modern art. She continued discussing the meaning of great art with the students, played the forgery game and while the students worked on projects Kristin would read stories to the them: myths, legends and stories about art and artists. There were no textbooks. 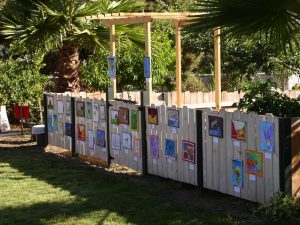 As the art lessons progressed, Kristin added new elements, including Art Bingo, a big hit with the students and something they looked forward to with every class.

By 2005 Kristin was running 6 classes with more than 60 students and often had a waiting list of those wanting to attend. She was making a name for herself in the San Diego homeschooling community and she even had public school students taking her afternoon classes. Some students were coming from as far away as Ramona to attend her classes in La Mesa (a 45 minute, one-way trip). As her students grew, so did the age range of her classes, and eventually Kristin taught students up through high school.

While Kristin’s art classes were blossoming, she and her husband were also homeschooling their son. In order to expose their son to a wide range of topics, Kristin set out to find books that he would not only love to listen to, but would teach him important things. These books grew into a large library. Eventually she used these titles in her art class curriculum, exposing her students to literature and stories that made the history behind the art come alive. Students took books home each week as her traveling library became an important part of the extended classroom experience. Kristin continued to develop her teaching methods, and her classes evolved into semester courses that focused on a particular art era. There were more games, more books and an annual Art Walk for friends and family to see the students’ work showcased.

In 2003 Kristin’s husband was laid off from his job of 17 years and the financial burden of the household fell upon her as he attended college to become a web developer and programmer. Her classes continued to flourish but as her husband’s new business began to grow Kristin reduced her classes in order to spend more time homeschooling their son.

At the end of 2008 Kristin made the decision to discontinue her art classes to focus on homeschooling their son and develop more fully her art history curriculum. This website is the culmination of that decision.

Kristin’s Draw Map Series is fast becoming a favorite of homeschoolers and has sold thousands of copies to date. All her books are sold on Amazon.com and her Draw Map Series is also sold on the Rainbow Resource Center and Exodus Books.

Kristin resides in Prescott Valley, Arizona with her husband and son.

My son has been very blessed to be in Kristin’s art classes for many years. Her new book Serious Fun, is a fabulous resource, and a great gift to my homeschooling friends. Way to go Kristin!