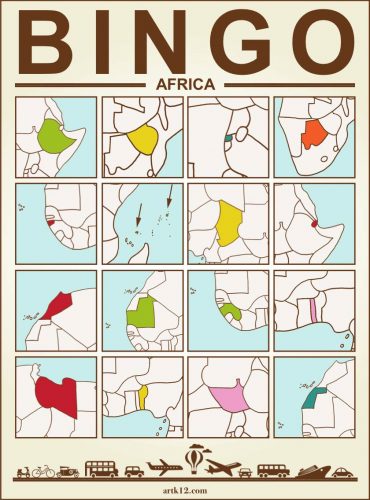 On the horizon is ARTK12’s new Africa Geography bingo game.

Some Rather Cool Examples

For example, on the car ride the game leader might read this:

Start in Algeria, stop for gas in Libya, get three flat tires in Chad and drive directly south from the southern most border of Chad to this country.

To play the facts level the game leader will read something like this:

The book can stand alone but will also be a nice supplement to Draw Africa for review and some new material: the capitals and other facts about each country. There will be enough bingo cards for 10 students to play at a time. Like all our other bingo books this is a disposable book, you will need to take it apart in order to use it.

Work has started on the new book. We expect it to be published some time in March or April of 2018. Maybe sooner…but we know how these things go!

The Very First of Nine Books

This will be the first of nine books in this series. The next two will be Europe and the USA (in honor of Classical Conversations, yes, we know who you are and what you’re doing each year!). We are not sure of the publication order of the next six after that.