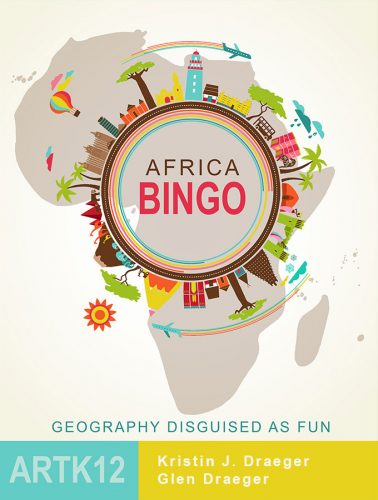 As often happens with new projects, the Africa Bingo game is going through some changes from our original plan.

First, it will only be a bingo game. No other games will be included. The issue we had was trying to keep the book under $20.00. We are including all 56 countries and 2 bodies of water. With 20 bingo cards and 58 flash cards containing information on the front and back this ends up being one of our largest books in the geography series weighing in at 84 pages and that includes downsizing the flash cards to fit 2 on a page.

Secondly, the games have changed a bit. Initially for 2 of the 4 games on the back of the flash cards we had planned to take your students through several countries until we reached the country next to the one they needed to know. But it occurred to us that it would occur to the students that they wouldn’t even need to listen to the preceding countries as the last country is the only one that really matters. Students are smart. We are too, if not a little slower than your students.

Four Bingo Games in One

The first and simplest game will be to show the country on the flash card and name it. This is geared toward your youngest students and students completely unfamiliar with Africa.

The second game is a north/south/east/west test along with knowing where countries are. The student will start in one country and after a few directions and some humor will be asked to travel north, east, south or west and name the country they have arrived in. Here’s an example:

You are in South Sudan with President George Washington. No one ever knew he was a time traveler until this very moment. He yells, “I have crossed the Delaware, I can cross the border going west into that country.” When you cross the border, salute the President and yell: “Diamonds are this country’s most important export!”

The third game is a little more complicated. It will usually involve 2 or more countries and the student will be asked what country these encircle, or share borders with or this may evolve even more. Here’s an example:

You have not eaten in 20 days. You have had no water in 40 days. This is not possible. After you wake up you realize you are in Cameroon. You travel with your Dad, to Chad, he’s mad, you don’t know why, that’s sad. What you do know is that the southern border of Chad and the eastern border of Cameroon is on this country.

The fourth and last game is simply a facts game that always names the capital of the country and several other facts (mostly geographical in nature) to help the student figure out what country is being targeted. Here’s an example:

1. Capital: N’Djamena (also the largest city)
2. The lake, which this country is named after, is Africa’s 2nd largest wetland
3. The Chari & Logone rivers are in this country
4. The Sahara Desert crosses the northern part of this country
5. The mountain, Emi Koussi, is the highest point (10,171 feet)

We hope this sounds both fun and educational. If you have suggestions or comments, let us know. We usually don’t listen, but it might make you feel involved. ;-)

Some of the more observant among you may have noticed the addition of The Husband’s name as one of the authors of this new book. The book, as are most things in this household, is the brain child of the Almighty Author, however, I will be doing all of the writing and research for this one and begged the author for second billing (it really was rather pathetic, but I prevailed).