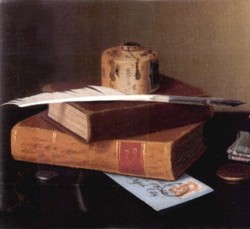 Native American traditions are full of myth and legend. Many of these have been successfully translated into picture books. Two authors that stand out are Joseph Bruchac and Gerald McDermott:

One of the earliest authors, Alvar Nuñez Cabeza de Vaca, found himself stranded in Florida after a failed expedition in 1528. After walking through much of the southern and southwestern states to return to Mexico City, he wrote about his travels in the new territory and published it in 1542 in Spain. Author Betty Baker has written a wonderful adaptation for students 10 yrs and older called Walk the World’s Rim.

Works of other early American authors, or their biographies that have also been successfully adapted are:

Author Jean Fritz covers the stories of the Declaration, Constitution, its authors and supporters in a series of books:

Two wonderful adaptations of Edgar Allan Poe’s works are particularly attractive. For very young readers Natalie Rompella has written a wonderful spoof on Poe’s The Telltale Heart. It is called Edgar, Allen and Poe and the Telltale Beets and is appropriately illustrated. The second, for older readers, is Classics Illustrated #4: The Raven and Other Tales illustrated and written in a graphic novel form.

Other prominent titles include:

For older children not yet ready for the real Thoreau, there is Henry David’s House by Steven Schnur.

With these titles added to the history and art book list, and the ARTK12 art curriculum, your student receives a great introduction to the classics of early American humanities.