I loved her earlier book, Dar and the Spearthrower, where tells the story of a boy named Dar who is coming of age somewhere in prehistoric Europe. This book is particularly useful in ancient art education because it beautifully describes life in the ice age and also describes both the carving and function of an ice age spearthrower. No amount of encyclopedic or textbook information can compete with the engrossing story that Cowley weaves; students will never forget this introduction to ice age culture and art.

The Golden Bull, one of few fiction works set in ancient Sumer (ca. 2600 BC) for children, tells the story of Jomar and his sister Zefa. At the outset, Jomar and Zefa’s parents send them to the great city of Ur to avoid the famine that scorches the countryside. While in Ur, Jomar apprentices to a goldsmith and works on the famous Bull Lyre of Ur. Again, her story telling is compelling and students will come away with a feeling for both the artifact and life within the ancient city of Ur.

The artifact highlighted in this story is the Great Lyre or Bull’s Head Lyre and dates from 2750 B.C.It is one of three lyres that British archaeologist Leonard Woolley excavated in the Royal Cemetery of Ur in the 1920s and can be currently seen at the University of Pennsylvania Museum. 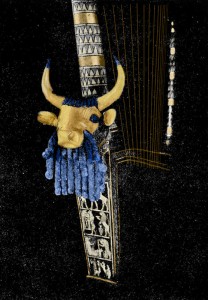 I can think of no better way of immersing children in ancient cultures (short of actually transporting them to the archeological sites) than through artfully-woven tales. Although both of these books are appropriate for ages 8 and up, older students (and adults) will both enjoy and benefit from reading them.

Replica of the Springing Horse of Buniquel