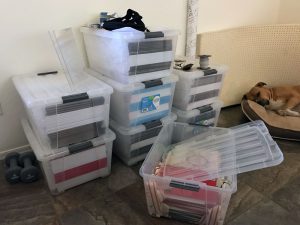 It’s all going to the convention….okay, not the dog.

The Great Homeschool Convention in Ontario, California is coming up. Less than a week away! June 15 – 17, 2017.

That’s it. It only works once. First come, one or two winners. Then, of course, I have to take your picture and put it on the website…..so by playing the game you are giving ARTK12 permission to put your photo on this website. Seriously? Yeah, seriously. I need to say that. And you’ll have to sign a photo release form….yes, yes, yes, so many hoops for ARTK12 to elegantly jump through! 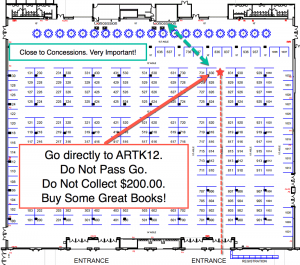 Where will we be? Well, we have the distinction of having the unique booth number of 830. Wow! Awesome. What a number! Television shows start at 8:30. It is also the area code around San Antonio, Texas. According to Wikipedia “Year 830 (DCCCXXX) was a common year starting on Saturday of the Julian calendar.” Honestly, I don’t know what that means. The California Angels radio station is AM 830. An 830 credit score is considered EXCEPTIONAL. And last, but certainly not least, 830 is the highest score ever scored by a Scrabble® player! It really has to be some kind of omen. I’m convinced!

Here are our convention prices. All prices include the hefty California tax (Sorry about that). Don’t blame me…I’m just the messenger.