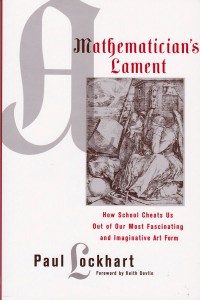 While researching math books for my son this week on amazon.com, I came across a small volume by a mathematician named Paul Lockhart titled: A Mathematician’s Lament: How School Cheats us out of Our Most Fascinating and Imaginative Art Form. The title intrigued me and promised of good things within, so I (virtually) turned the page. The epigraph literally caused my heart to beat faster:

“If you want to build a ship, don’t drum up people to collect wood and don’t assign them tasks and work, but rather teach them to long for the endless immensity of the sea.”

Next, the mathematician who facilitated the publishing of this essay wrote in the forward, “It is, quite frankly, one of the best critiques of current K-12 mathematics education I have ever seen,” and finishes with: “I would have loved to have had Paul Lockhart as my school mathematics teacher.”

Mr. Lockhart divides his essay into two parts. Part one is called “Lamentation.” In this section he illustrates his lament with an allegory.

“A musician wakes from a terrible nightmare. In his dream he finds himself in a society where music education has been made mandatory. ‘We are helping our students become more competitive in an increasingly sound-filled world.’ Educators, school systems and the state are put in charge of this vital project. Studies are commissioned, committees are formed, and decisions are made-all without the advice or participation of a single working musician or composer.

Since musicians are known to set down their ideas in the form of sheet music, these curious black dots and lines must constitute the ‘language of music.’ It is imperative that students become fluent in this language if they are to attain any degree of musical competence; indeed, it would be ludicrous to expect a child to sing a song or play an instrument without having a thorough grounding in music notation and theory. Playing and listening to music, let alone composing an original piece, are considered very advanced topics and are generally put off until college . . .”

Compulsory music theory without a hint of music. “Sadly,” he continues,

“our present system of mathematics education is precisely this kind of nightmare. In fact, if I had to design a mechanism for the express purpose of destroying a child’s natural curiosity and love of pattern-making, I couldn’t possibly do as good a job as is currently being done-I simply wouldn’t have the imagination to come up with the kind of senseless, soul-crushing ideas that constitute contemporary mathematics education.”

Again, wow. We have all felt, at one time or another the senseless, soul-crushing of mathematics lessons, but who are we to say something is wrong? We are not mathematicians. But Paul Lockhart is. In fact, according to the blurb at the back of the book he is a “brilliant research mathematician” at Brown University, or was until he returned to public schools to teach math. How glorious to hear someone of his stature and clout say:

“Everyone knows that something is wrong. The politicians say, ‘We need higher standards.’ The schools say, ‘We need more money and equipment.’ Educators say one thing, and teachers say another. They are all wrong. The only people who understand what is going on are the ones most often blamed and least often heard: the students. They say, ‘Math class is stupid and boring,’ and they are right.”

Then my virtual excursion into Lockhart’s book expired and I had to wait for my very own copy to arrive in the mail. And I’m going to leave you here to let you digest what he is saying. If you want to read the entire first chapter virtually, you can find it here:

Keep in mind we haven’t even arrived at the good part where he claims that math, as he says in the title, is “our most fascinating and imaginative art form.” Math is art? This essay has both validated my suspicions and changed forever the way I look at teaching math.