Skip to Main Content
We are an Amazon Affiliate. We make a commission if you use the Amazon links on this page.

Peter Rabbit is always getting into trouble and—always getting out of it. Beatrix Potter’s famous tales about Flopsy, Mopsy, Cotton-tail, Peter and their friends have delighted children (and adults) for over a century.

This Dover Children’s Thrift Classic (opens new window) is unabridged and contains over 50 black and white illustrations. It is available in paperback and Kindle. The stories in this edition are: 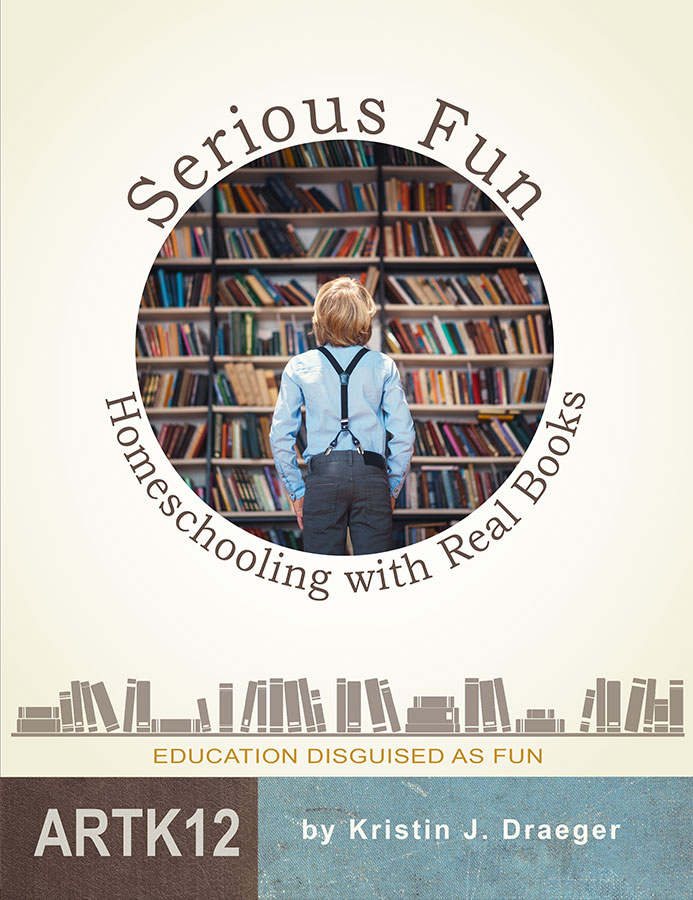 Planning to Use This Book?

Here are some additional resources for your students. 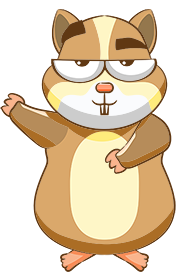 Vocabulary for Peter Rabbit and Eleven Other Favorite Tales

Sniffy is a hamster...a talking hamster who likes words. A hamster wordsmith, I guess you could call him. Read along (or just listen) as Sniffy defines and/or illustrates the following words from the reading. 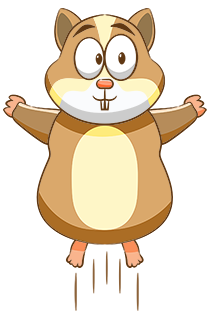 What do you mean I've been eating too much? I'll eat what I want, when I want and where I want. You listen here, Mr. Draeger, I'm the star of this web site—without me you wouldn't even have a web site. What? What do you mean I'm impertinent, pert, saucy and irreverent? I'm not impertinent—I'm a star. I'll be famous someday. If you think I'm going to be hanging around here my whole life—listen, buster bugle head, Disney wants to make a movie about me and then I'll be a—is that thing on? You mean—they can hear me? Ohh, well, yes—see, I'm practicing my acting skills and—yeah—I was pretending to be impertinent and um, well, I guess I need to practice some more. Good night. 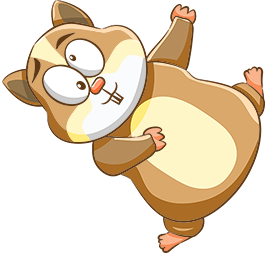 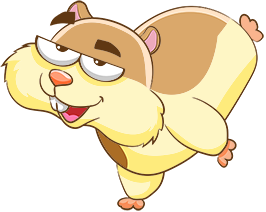 Let the stormy clouds chase.
Everyone from the place
Come on with the rain
I've a smile on my face
I walk down the lane
With a happy refrain
While the rain's comin' down
With my mackintosh on.

By the way, a makintosh is a raincoat.

We have a lot of pets in our house. There’s Bouncy, the hamster, Calvin and Hobbes a couple of red cap goldfish, Basketball, a large, round, orange goldfish, Shadow, a charcoal-colored plecostomus (a kind of fish that eats algae off the glass), that is over six inches long, Henry and Mildred, two green anole lizards that like to eat flies and crickets and Dobie our family dog that will eat anything including Legos, Bionicles and toilet paper.

The other day I was in my son’s room staring absent-mindedly at Shadow when I heard a quiet, but familiar voice.

I should be used to this kind of thing by now, but it startled me. I scanned the room trying to figure out where the voice had come from.

“Well, are you ready?” it said again.

“Ready?” I rose from my chair, but a strange thing happened as I stood up. Instead of looking down on everything I was suddenly looking up at everything. It was as if I’d fallen out of the chair and now the chair and everything around me was gigantic. The lizard cage looked like something you’d see at the zoo that would house lions or tigers. Henry and Mildred looked like Komodo Dragons. The fish tank soared above me like a giant aquarium at Sea World and Shadow looked like a big, menacing shark.

“Let’s go.” It was Professor Bartholomew Higginbottom, the literary mouse who is in charge of the large library he keeps in the walls of my house. His long gray whiskers twitched as he spoke and his little, round, shiny black eyes sparkled with excitement.

“Where are we going?” I asked.

“To see Peter Rabbit, of course.”

“Just follow me,” the professor said. The professor scurried behind a bookcase in my son’s bedroom to a small hole in the wall. I followed him into it, then descended using nails in a 2 by 4 stud to another hole that opened on our patio under the wood pile. After the professor determined it was safe we sprinted across the patio, past the planters, the plum tree and finally under the garden fence. At any moment I felt like Mr. McGregor was going to show up with a shovel and try to swat me flatter than a pancake. In the garden the professor led me to a large hole, far bigger than anything a mouse or even a rat could make. He scooted in to it with me right behind him.

The tunnel started out like an ordinary dirt tunnel, but as we descended things began to change. The walls were lined with candles about every five feet which was really about every ten inches. Our dirt path became a brick one and between the candles a number of paintings, drawings and photographs of rabbits, mice, a hedgehog, dogs, cats, squirrels and chipmunks had been hung.

“This is Peter Rabbit’s home. He’s expecting us—ahhhh there’s his front door now.” The door was constructed of a large, round dinner plate, one of our missing dinner plates.

“I told Peter you wouldn’t mind.” The Professor knocked.

“Come in, come in,” someone said in a low, strong voice with an English accent. “Ah, Mr. Draeger, so good to meet you at last.” As I looked around the large room I noticed many things that had come from my house. The table was made of a large, oval serving plate that went missing a few weeks ago. It was held up by a stack of my paperback books in the middle. For chairs six teacups had been taken from our china cabinet. In the corner a small pillow that used to sit on our couch obviously served as Peter Rabbit’s bed.

Peter Rabbit was very large compared to the Professor and me. His nose twitched and his ears flopped as he spoke and, like the professor, he too wore spectacles.

“Peter Piper? But I thought you were Peter Rabbit.”

“I am, my parents named me Peter Rabbit after the character in the book.”

“But who is Peter Piper?”

“That’s the same name she used in her story, ‘The Tale of Mrs. Tiggy-winkle,'” I said.

“Spot was her dog, Xarifa was her dormouse and Pig-Wig was—”

“Did you know,” Peter Rabbit continued, “that ‘The Tale of Peter Rabbit’ is one of most famous children’s stories ever written?”

Peter Rabbit had been sitting in the corner talking to us. His fur was light brown and I could see that it was very soft. He stood up on his hind legs and towered above us like a bear. He had been sitting on one of my missing dictionaries. “Beatrix Potter first wrote the story of Peter Rabbit in a letter to the young son of a governess she once had.”

“What’s a governess?” I asked.

“E-gad! You don’t know?” the rabbit said. “A governess is hired by a family to train and educate the children. Beatrix never went to school; she always had a governess to teach her. Her governesses taught her to read, write, paint and play music. Come with me I want to show you something.”

Peter Rabbit led us to an opening. “This is the back entrance,” he said as he led us into a much larger room with lots of paintings and drawings on the wall and all manner of animals milling around looking at them. There were sparrows, doves, mice, rats, a large alligator lizard that I had seen in the garden the day before, a garter snake, two gophers and a large assortment of insects: cockroaches, beetles, caterpillars and one praying mantis. They looked at the paintings and spoke in hushed, whispering voices.

“Her use of color is quite magnificent,” I heard the alligator lizard remark to a mouse.

“She’s my favorite,” the mouse replied. “I have several of her prints in my dining room.”

“This is my Beatrix Potter museum,” the Rabbit said. “Beatrix was born in London in 1866. She wrote many children’s stories but she was also an accomplished artist. She worked in watercolors and made many sketches and drawings of her pets.

“Why is that big wool rug hanging on the wall?” I asked.

“Beatrix Potter also raised Herdwick sheep, known for their hardiness and gray fleece which is often used in wool rugs.”

After Peter stopped talking I noticed it was far quieter than it was when I entered the museum. Then I realized everyone was staring at me.

“It’s quite all right,” Professor Higginbottom said. “He’s with me—go about your business.”

“He’s enjoying the museum, same as you,” the Professor said.

“Tell him to stop setting those traps. I nearly lost my tail the other night.”

With that Peter Rabbit escorted us out of the front entrance. For a moment I didn’t realize where we were. Large, leafy trees in giant pots surrounded me—then it hit me—I was in the arbor with all our plants. I still expected Mr. McGregor to show up at any moment. But he didn’t!

Discussion Questions for Peter Rabbit and Eleven Other Favorite Tales

“The Tale of Peter Rabbit”

“The Tale of Benjamin Bunny”

“The Tale of Two Bad Mice”

“The Tale of Jamima Puddle-duck”

Why does Jamima Puddle-duck trust the fox?

Your book says Jemima Puddle-duck was a “simpleton.” What does that mean?

Why don’t the animals ever pay Ginger and Pickles for the things they take?

Thank goodness I was never sent to school; it would have rubbed off some of the originality.

Most people, after one success, are so cringingly afraid of doing less well that they rub all the edge off their subsequent work.

I cannot rest, I must draw, however poor the result, and when I have a bad time come over me it is a stronger desire than ever.

All outward forms of religion are almost useless, and are the causes of endless strife. Believe there is a great power silently working all things for good, behave yourself and never mind the rest.

Thank God I have the seeing eye, that is to say, as I lie in bed I can walk step by step on the fells and rough land seeing every stone and flower and patch of bog and cotton pass where my old legs will never take me again.