Skip to Main Content
Great primary resource for students and teachers!
Schalles was a medic serving in the 1st Ambulance Co., 2nd Division.

The Worse for It takes the reader to the source. Through the letters of Robert E. Schalles one can almost experience his fears and joys while he deals with the mundane and horrifying duties of a soldier who yearns to return home to his family’s farm.

The Worse for It is an insightful and heartfelt look into World War I through the eyes of Robert E. Schalles.  Experiencing the horrific realities of war, Schalles evolves from a midwestern farmer to an experienced, war-hardened medic. The journey with Schalles, valuable for teachers and students alike, brings to life the Great War in a way that no textbook can.

The title, The Worse for It, taken from one of Private Schalles’ letters describing the war’s effect on him, could very well express the impact this war and its aftermath bore upon the entire world. One cannot read these letters without contemplating the life-changing implications of war on the soldiers and their families.

—Mark A. Reed, Attorney at Law 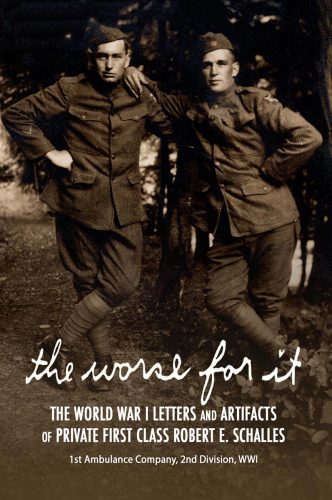 Robert E. Schalles was part of the 1st Ambulance Company, 2nd Division during the Great War. The explosion that wounded him killed the man next to him. His letters home during his military career span 1917 – 1919. They start with his training in Texas, to the front lines in France and finally to Germany as part of the American Army of Occupation. The book includes:

Sample pages from The Worse for It

Robert E. Schalles was my grandfather. He was born and raised in Colorado, signed up for the Great War when he was twenty-four because, he said jokingly in his old age, he had run out of money. He fought in and survived that war, then over a decade later married my grandmother when he was forty and she was twenty-two. They had an only child, my mother. He died at the age of ninety-eight less than a year after my grandmother died.

I did not know my grandfather well. He was not a man who spoke freely or often. I have wondered over the years what effects the war may have had upon him. Over a decade ago my mother gave me the letters she had that he had written home after he joined the service. As I read these I began to think even more about his involvement in one of the great conflicts of the 20th century.

Fortunately, he did not die in that war, but much of my reading about war indicates that surviving a war, particularly for those who faced combat situations, is difficult. My grandfather was a medic on the front lines in France. The explosion that injured him killed the man next to him. The experience of the war, he wrote in one of his letters, made an “impression” on him.  Exactly what that impression was—I do not know—nor do I think, as much I would like to understand it, that I can.

On Mother’s Day in 1918 my grandfather wrote:

I have learned a good deal more than I expected since crossing the great pond, but am more the worse for it.

There have been a lot of war movies in the last few decades that have attempted depict war in its full, brutal reality. I think of Apocalypse Now, Platoon, Saving Private Ryan, Band of Brothers and A Thin Red Line, but as good as these may be my grandfather wrote in another letter that the realities of war “can never be realized except by being there.”

One of the greatest war novels ever written is All Quiet on the Western Front by Erich Maria Remarque. In the epigraph to the novel Remarque wrote:

This book is to be neither an accusation nor a confession, and least of all an adventure, for death is not an adventure to those who stand face to face with it. It will try simply to tell of a generation of men who, even though they may have escaped its shells, were destroyed by the war.

In all there are 45 letters. They begin on September 30, 1917 while my grandfather is being trained in Texas and end on August 10, 1919 after his return, though the last “letter” is simply a pre-printed postcard announcing that he is back.

There are some very poignant passages in these letters, particularly the ones he wrote to his mother on Mother’s Day in 1918 and 1919, and one to his sister on June 10, 1918. There is also a lot of mundane information and there are definitely times when you need to “read between the lines” as the letters back home had to go through a censor. In a postcard to his older brother, Arthur, dated June 16, 1918, he wrote:

Will write a line to let you know I am still O.K. Things are lovely? on this side of the Pond. It is the fourth of July everyday here judging by the noise.

It is interesting to read the postcard that he sent to his parents on the same day.

But it is all in these letters: the new recruit, living in a foreign land for the first time, experiencing the horrors of combat, enduring the boredom of military life and longing to go home.

It is my hope that you enjoy this bit of history through the letters, photographs and artifacts of Robert E. Schalles.