I met Iris during my previous job. I used to be a courier, a delivery guy. I delivered packages to businesses all over downtown San Diego and Coronado. Sometimes I even delivered books. One of the things that I liked about that job, before they laid me off, was that I did a lot of driving which allowed me to listen to dozens and dozens of recorded books.

Anyway, have you ever had something happen to you that was so strange that when it was over you were not sure that it happened at all? Something like that happened to me when I was still delivering packages to make a living.

I had a delivery to the 25th floor of a building in downtown San Diego where I worked. If I had thought about it a little longer I would have known something was strange—that building on the corner of Broadway and 8th has never had a 25th floor, but I proceeded into the elevator and mechanically pushed the button for the 25th floor as if I’d done it hundreds of times before.

There was no one in the elevator with me so I zoomed to the top floor and stepped out into a long hallway. The package read, “Suite 2500.” There was no name. I strolled down the hallway past paintings hung on the wall. There was one with a knight, without a helmet, sitting on a horse that looked as if it was going to collapse. Another one showed a fairy putting something into someone’s eyes. While I looked at these I kept looking for a door—until I finally saw one at the very end of the hallway. 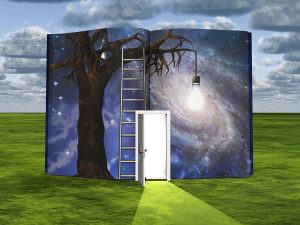 “Hmmm,” I mused to myself. “This is strange.” I had been in that building hundreds of times and the doors are on either side of the hallway, not the end of it because the end of it is the outside wall of the building. I thought maybe it was a painting that looked like a door and that someone was trying to play a trick on me, but when I stood before it it was, without a doubt, a real door.

It was thick and wooden with many carved figures on it. There was a giant who had been tied down to the ground by hundreds of little people, a smile—a very strange smile, because it had no face around it and many other figures that I did not look at closely. A round, brass knocker as big as a frisbee hung from the dark wood. I knocked, not because I thought anything was going to happen, but more because I didn’t know what else to do. I certainly was not going to open a door into mid-air 25 floors up!

“What is going on?” I said out loud and then I noticed the handle began to turn. I wanted to run; I didn’t want to run. I was scared; I was excited. What was going to happen? Who or what was behind the door? It opened in gradually and I surveyed a dirt path through a forest with trees that had trunks as big around as those huge tanks that store gasoline or water. I could smell the pine needles and could feel a warm breeze. How could this be? I did not know, but I did not care.

With some trepidation I put my right foot on to the path as if testing swimming pool water to see how cold it might be. Solid like cement. Slowly, cautiously I put all my weight on my foot then even more slowly stepped all the way in with my other foot. When I turned around to see where I had come from there was only more forest. No door. I don’t know why but I blurted out those famous words from Laurel and Hardy: “This is another fine mess you’ve gotten us into.”

For miles, it seemed, I followed the path through the forest, past trees, streams and granite rocks as big as houses. The sun shone down through the green canopy in long, thin, needles of light. The walk exhilarated me and it was a lot more fun than working—but I was working. I still had the package in my hand. This was suite 2500. Whom was I to deliver the package to?

After some time the path began to ascend. I breathed heavily and started to sweat as I trudged up the trail. The air cooled and several times I had the strange feeling that I was being followed or watched. I had seen no life, animal or otherwise. I began to feel fear, not exhilaration. After about thirty minutes of climbing I sat down on the side of the trail. I had no food, no warm clothes, the streams had disappeared and I had no idea where I was, but after some rest I started again. What else could I do? I think I had been hiking about 20 minutes when I noticed the opening in the forest and beyond it, on a large mountain, the most gigantic tree I have ever seen. Its roots descended down the sides of the mountain like huge octopus tentacles that looked as if they had a grip on the mountain and might at anytime lift it up from the earth.

It took me four or five hours to reach it. From its base the tree looked even bigger. Carved into one of the fifty-foot-wide roots was a staircase that ascended to the trunk of the tree. I climbed for another hour. When I reached the top I was exhausted. The tree’s trunk was as big around as a skyscraper. Its branches, hundreds of feet above my head, were bigger than the biggest trees I have ever seen and the limbs that shot off from those branches were the size of sequoias.

But the tree had a door. On it exquisite gold numbers and letters read simply: 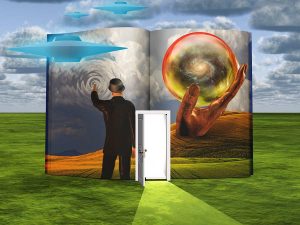 For a long while nothing happened. I knocked again. A faint sound emanated from inside the tree until finally the door creaked open, as if it had not been opened in a long, long time.

Before me stood an older woman. I guessed her to be about 70. Her hair seemed to be more of a sandy blond than gray, her face was square, her lips thin and her nose broad. She had deep brown eyes and she looked at me not with fear or as if I had interrupted something important, but with curiosity as if she considered my presence to be a great adventure.

“Hello,” she said with an English accent.

“Hello,” I replied. “I have a delivery for you,” not knowing what else to say.

“That is most strange,” she said. “I’ve never had a delivery here before.”

“I’m Iris,” she said with a small smile.

“Just Iris. You, young man, are in the World of Literature.”

“I’m teaching literature on a web site,” I said.

“Literature is not taught here,” she said, “it is lived. This is literature’s World. Did you think that all those characters you read about in books did not exist? Come now, you have much to learn I can see. Would you like to come in?”

“I want to take you somewhere—follow me.”

I followed Iris up a long, wooden spiral staircase that wound its way up the inside walls of the hollowed out tree. I gained new strength in the tree and became excited to see what she wanted to show me. All along the staircase thousands and thousands of books lined, it seemed, miles and miles of shelves. All the books had titles I had never seen before. I stopped and pulled one out that read, “Gunther Humphwagon.” I opened it. For a moment I didn’t know what I was looking at, then I realized on one side was a flesh-and-blood thick-lipped mouth and on the other a left ear.

“What can I do for you?” the mouth said. I was so startled I dropped the book.

“Ouch!! Iris, what kind of clumsy oaf have you brought here?”

I looked at Iris, then at the—the—I didn’t know what it was—then back to Iris. “I’m sorry,” I stammered. “I thought it was a book.”

“There are no books here,” she said as she closed Gunther and placed him back on the shelf. “All that we have here is what is contained in books. We have the stories themselves. Come, let me show you.”

We reached the top of the staircase in a few minutes and stood on an outside platform on the very top of the tree. It was a magnificent view. Now I know what they mean when they say, “I was at the top of the world.”

“Do you see the ocean?” Iris asked. I nodded. “Well, Captain Ahab is out there chasing his white whale, Wolf Larson, one of meanest and most feared men on the high seas, is running from his brother and Gulliver is sailing on to Lilliput. Over there,” she pointed to another forest, “you can see Middle-Earth and beyond that Narnia. Do you see that huge city? It’s London. Lot’s of people live there: Sherlock Holmes and Oliver Twist to name only two. Over there,” she pointed farther to her right, “that’s Wonderland where Alice has her adventures. Do you see that thin line that crawls up into the sky? That is Jack’s beanstalk. Way off over there,  you can see Don Quixote and Sancho Panza on the Don’s quest. All this is their world. They live and breath here.”

I was dumbfounded and overwhelmed. What a place this must be! Here, one did not have to read the stories one could see them, one could talk to the characters, one could almost live inside a novel or story or poem. It was incredible.

“Oh, I almost forgot,” I said. “What about your delivery? What do you think is in the envelope?”

I handed it to her. She opened it and pulled out a piece of paper. It read:

Here he is. He will be back.

“It means,” she said without hesitation, “that you are the delivery. You have been delivered to this world, to the world of which I am one of the guardians and guides. It means that when you leave this world you will eventually come back.”

“That is no concern of ours.”

“Be patient,” she said. Then she pushed me off the platform. I felt myself falling and falling and then, suddenly, I stood in a hallway with a package in my hand, but it was the 24th floor not the 25th. I was shaking uncontrollably, but, nevertheless, I had an immediate longing to go back, to explore more of that world. And I have been back. You can come along too, if you’d like.